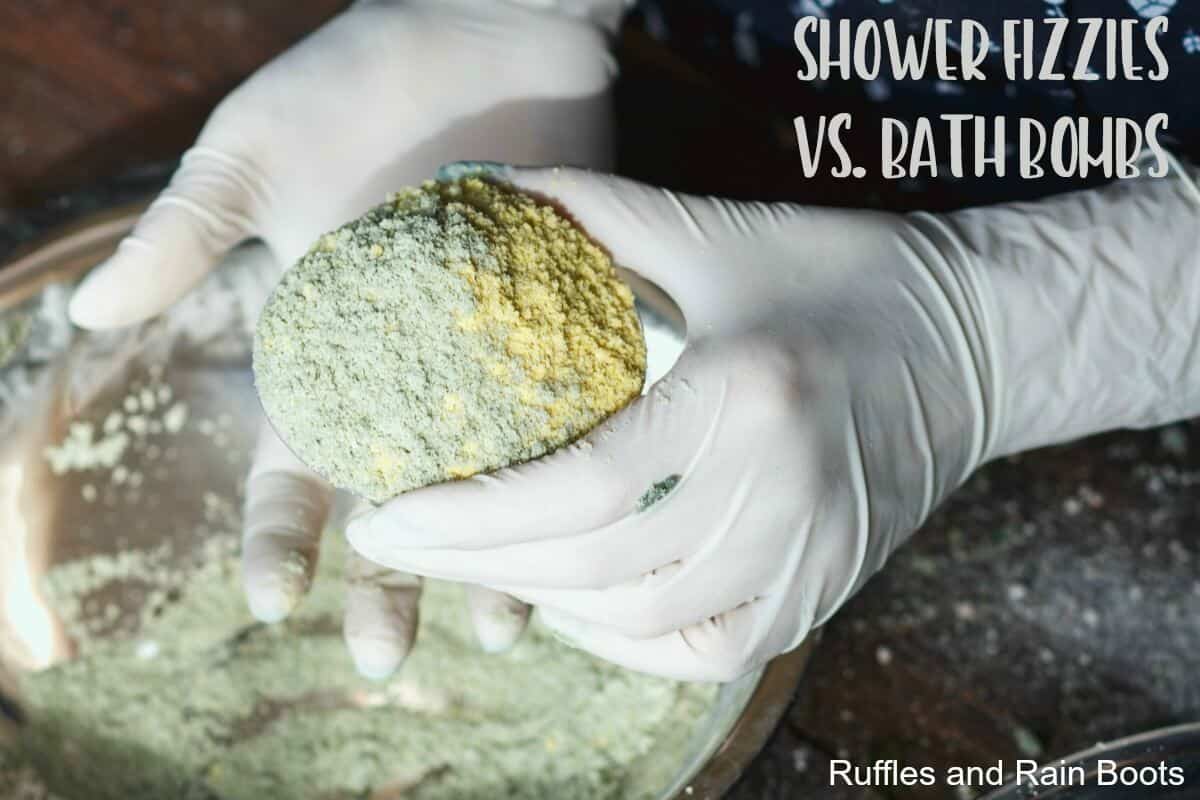 What You'll Find On This Page

How are Shower Fizzies and Bath Bombs Different?

Shower fizzies aren’t the same in shape or ratio of ingredients as bath bombs. Let’s start with the main differences:

1 – The Shape of Shower Fizzies Versus Bath Bombs

Bath bombs are often round and let’s be real: you don’t want a shower fizzy to be round.  It becomes a shower hazard if it is rolling around while you’re taking a shower!

Shower fizzies are ideally flat (or flat-ish) on one side to prevent movement. Although some people put the shower fizzy directly under them while they shower, it’s recommended that they are placed on a ledge or even over the drain.

2 – The Concentration of Essential Oils

With bath bombs, the intended use is to have the mixture interact with the skin directly. Shower bombs, however, the intent is more as a shower steamer – it is designed to release the oils into the air.

Shower fizzies have a higher concentration of essential oils because you CAN increase the aroma (and therapeutic benefits of that aroma) without damaging skin.

The benefits of a shower fizzy are more focused on aromatherapy.

3 – The Mix of Shower Fizzies Versus Bath Bombs

Shower fizzies don’t need to contain large quantities of moisturizing oils like bath bombs do. In fact, you only want enough oil in a shower fizzy to hold it all together.

Again, slipping and sliding in a shower isn’t deemed ‘healthy.’ ;)

Bath bombs, however, can use a higher amount of oil because it’s interacting with the skin. We often include moisturizing oils in bath bombs to have a restorative benefit.

The mixes for the shower fizzies and bath bombs can start off the same (sodium bicarbonate + citric acid), however, the levels of additions vary. To be honest, you don’t even really need citric acid in shower steamer recipes! 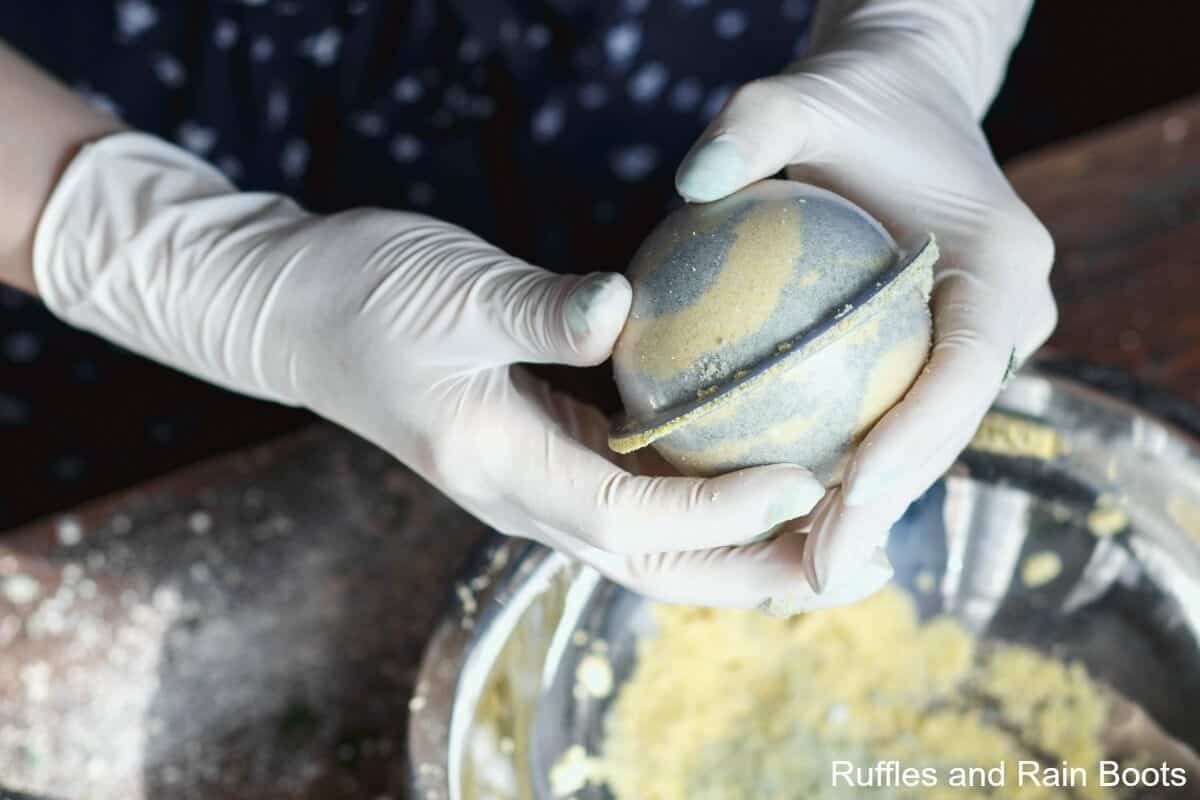 What Type of Mold Is Best for Shower Fizzies Versus Bath Bombs?

As noted above, shower fizzies should not be round. Shower steamers are best molded in something which has a flat side. We often mold shower bombs in:

Bath bombs, although most of the time they are spheres, don’t have to be. We mold bath bombs in everything listed above and more!

What Is a Good Shower Steamers Recipe?

Ultimately, you want the mix to be packed well, otherwise the shower fizzy will fizzle out too quickly for the aromatherapy benefits to kick in. There are two schools of thought with shower steamer recipes – use citric acid for maximum carbon dioxide release or don’t and save money.

If you’re new to making shower steamers, a good starting recipe for high aromatherapy benefits is:

How Do I Make Shower Fizzies with Citric Acid? 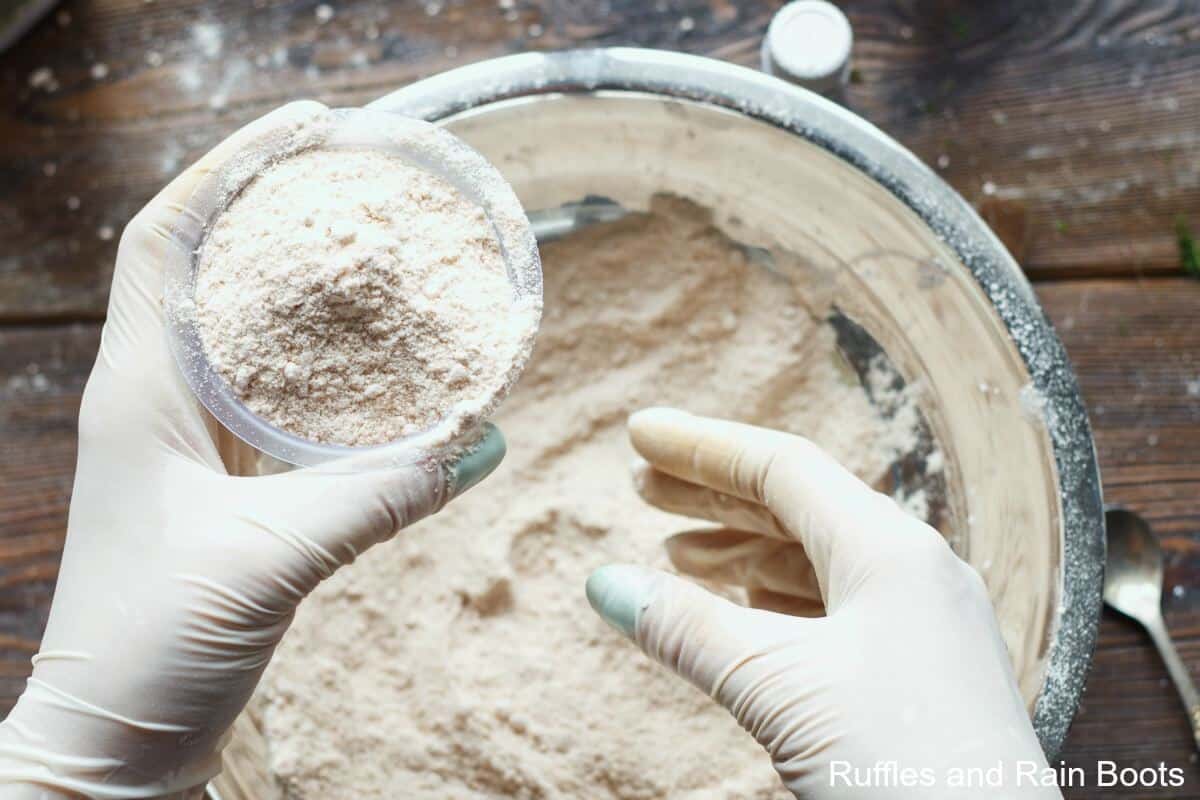 How Do I Make Shower Steamers Without Citric Acid?

If you’d like to save money and test shower steamer recipes without the citric acid, a good recipe is:

These are super-duper easy to make! Mix the water and baking soda, add the essential oils, and pack the mix tightly into a silicone mold. Let rest for at least 1 hour (overnight is best).

You can bake the recipe, too (350 degrees F for 20-minutes), but I don’t believe it’s necessary unless you live in a very humid environment.

What Are the Best Scents for Shower Fizzies?

Well now, that’s 100% personal preference. I like to think of the benefit I’ll get from the aroma – after all, that’s exactly what shower steamers are for.

If you’re a morning shower type, try uplifting, bright scents. Some are citrus, peppermint, and eucalyptus.

For those who like to take shower in the evening, try calming, soothing scents. Some of my favorites are lavender, frankincense, and anything mixed with vanilla.

Ultimately, the scent combinations for shower steamers are as unlimited as those for bath bombs. You can even use a bit more of them in the mix!

How Do I Use a Shower Steamer Versus a Bath Bomb?

How Do I Use a Bath Bomb?

To use the bath bomb, drop it in a tub filled with warm water.

The reaction is immediate – the baking soda and citric acid release carbon dioxide. That’s the amazing fizzy action of a bath bomb. When this reaction takes place, the bath bomb breaks down, releasing the aroma and any beneficial oils or salts.

How Do I Use Shower Fizzies (Shower Steamers)?

When you place the fizzy in your shower, take note: most people will try to put the shower bomb directly under them. Don’t.

Instead of keeping it directly under you, place it over the drain, at the back of the shower (farthest from the drain), or on a ledge or shelf. I place them on the drain or on the inside edge of the tub.

Let’s face it: no one ever wants to have to tell the story of how they slipped on a shower steamer and had to call the paramedics… 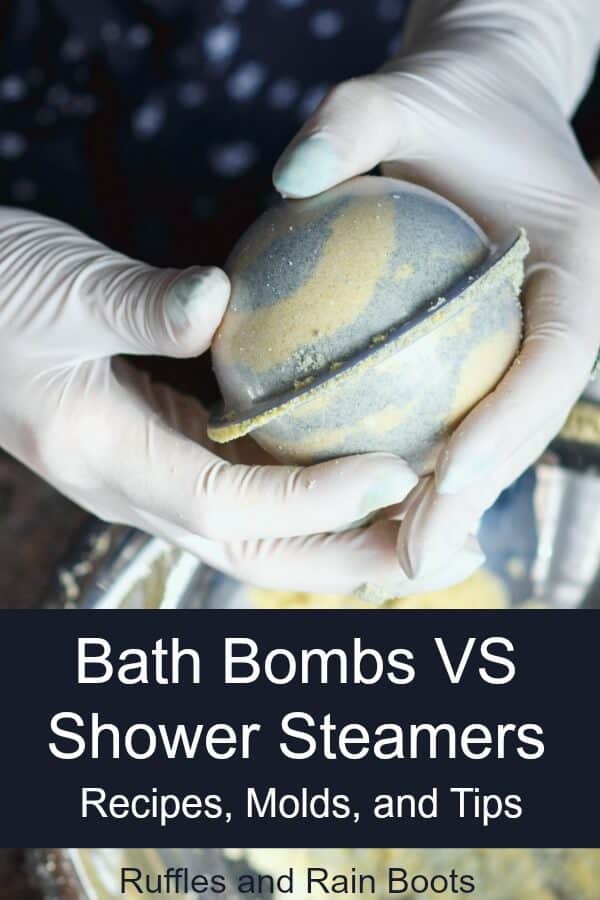