Skip to content
Skippyjon Jones is one of the best series we’ve brought into our home. It’s fun to read, use for pretend play, and even add a bit of learning into a little one’s day. Join us for this Skippyjon Jones themed learn and play. 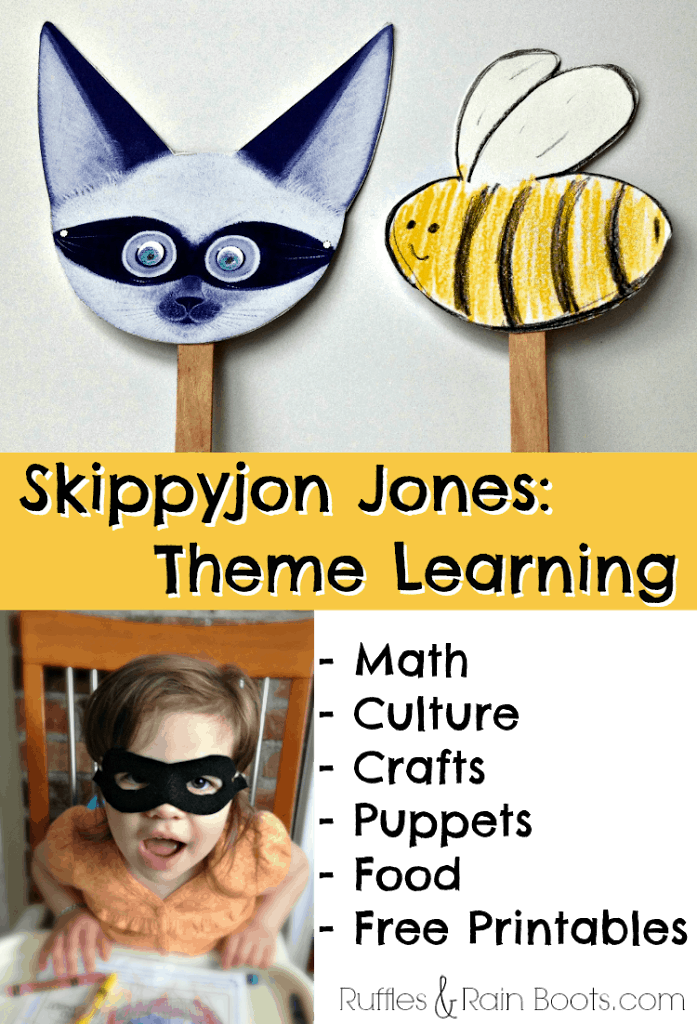 If you have ever spent time with young children, you might already know of this crazy, adorable Siamese cat.

Yep. The entire book sounds just like that and kids absolutely adore it! Our 2.5 year old cannot get enough of this kitten, who pretends to be anything other than a Siamese cat.

I just had to put some learning fun together to go along with one of her favorite books. We even ended up carrying the fun through to dinner! Click on “Read More” to join in the fun.


What You'll Find On This Page

Knowing how valuable it is to stand on the shoulders of giants, I started Googling (what else?) and came across a coloring page to get her started. The coloring page can be found here.

As she was coloring, she was humming the Mexican Hat Dance song used in the book. Cute, right?

Now listen, I know the photo quality of this picture is downright horrid, but look at her coloring!

She has now started to pick each section and color it. During this coloring session, she even went as far as to tell me the colors she was going to use on each part.

How to Make a Quick Skippyjon Jones Puppet

Although Elise can recite this story, I use whatever means necessary to be able to reinforce a story’s themes. Skippyjon Jones covers the power of choice, courage, other languages, and the ever-popular, imaginative play (or pretend play). Obviously, there are more but these are the ones I thought of at the time to include in our play.

I used this mask drawing to make a Skippyjon Jones puppet my favorite way: quick and easy.

After printing off and cutting out the mask, I drew in some eyes using the crayons Elise was using while coloring. I know, I know: the eyes look kind of crazy…

I cut out the mask and outlined it onto a paper plate. Once the paper plate was cut out, I glued the mask to it and duct taped a large craft stick to the back.

For the bee, I used a small paper plate to freehand a bumblebee. Again, stealing some colors from my kid, it was decorated and puppetized (my made up word for duct taping a craft stick to the back).

After a bit of puppet play, and reading the book for the 400th time, we began our discussion about the language used in Skippyjon Jones. We discussed rhyming – such a hit with Elise – and Spanish.

We also did a few words that went along with the story, like hello, goodbye, friend, cat, dog, and beans. She really likes saying ‘hola’ now.

I don’t have a photo or video of this next bit of fun, but Elise really enjoyed it. Using a piece of scrap construction paper, I wrote the numbers one through nine. Dumping out a pile of black beans to pull from, we counted out the number of beans in Spanish and piled them under the corresponding number on the paper.

I completed this VERY quick craft while she was playing puppeteer. I drew a mask free hand on paper, checked it against her eyes and head for size and cut it out of black craft felt. After punching holes in the felt, I tied two pieces of yarn and it was ready.


Do this. If you do one thing, do this. She cannot stop talking about her Skippyjon Jones mask! It is inevitable that she ends up wearing this mask to the grocery or the gym. I guarantee it.

If you have the time (and inclination), you might think about sewing a very thin (1/8 of an inch) piece of elastic to the mask instead of using yarn like we did. If it keeps getting the attention it is, I will remake one with the elastic so that she can put it on and take it off by herself.

We played a lot and worked up quite the appetite! For dinner, I thought it would be fun to continue discussing the Mexican culture. Now, this isn’t too imaginative because I didn’t want to leave the house to go to the grocery.

I just used what I had on hand, but you could make something inspired like ceviche or fajitas.

For our food fun, we made guacamole (Elise’s favorite food) and a quick chicken, black bean and Mexican rice dinner. Served with a whole wheat tortilla, Elise gobbled it up!

There were two things I thought about but didn’t get a chance to incorporate:

We’ll just have to continue the Skippyjon Jones fun later! Click on the image of this crazy cat at the right to get one today!

Although we borrowed the original Skippyjon Jones from the library, we have some of the series here at home already. A big favorite of Elise’s is Color Crazy. The silly cat’s imagination runs wild in this color-learning book: he colors some purple puddles, brown bees, and even manages to sneak in some chihuahuas!

Don’t forget: if you liked this or want to share, please spread the word!