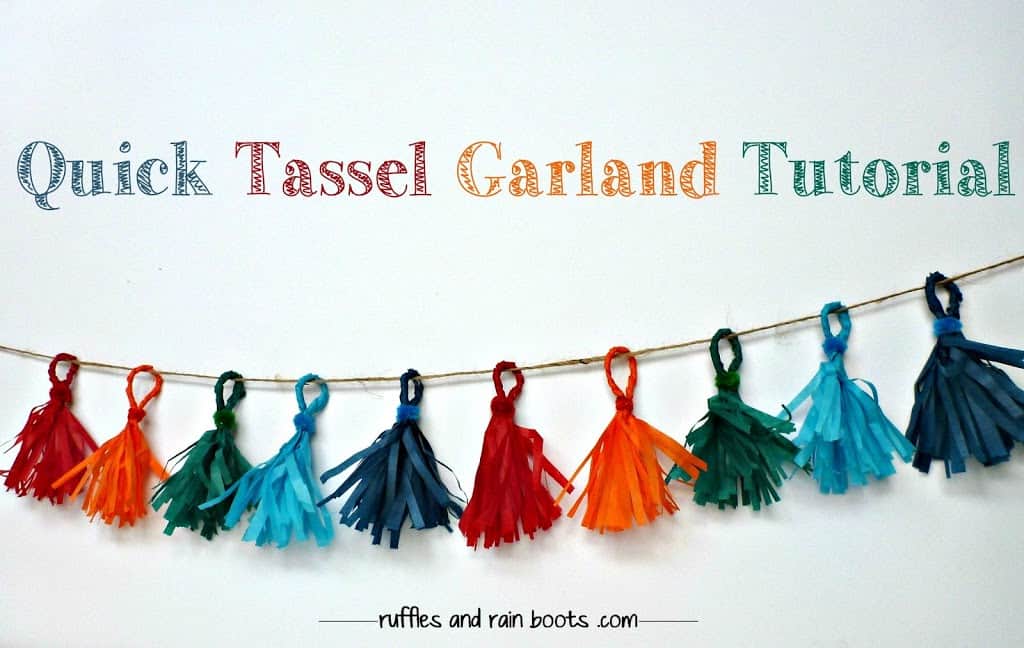 I’m going to open up and admit that I now accept something you all already know is true: my daughter doesn’t care about most of the garlands I make her.

It doesn’t, by the way, mean that I’m going to stop making them. I love garlands and because they are the easiest way to make something “festive,” I’m going to continue whipping them out for every opportunity that deserves one. Party? Garland. Family coming in? Garland. Front door opening? Garland…

My point – that should have been made many sentences ago – is that most garlands are noted by the kiddo but not played with. Well not anymore! This fringe garland made from tissue paper was easy to make and is being used to add some fun to our newest project.

Click on “Read More” to learn how to add some color and fun to anything!

This garland is part of a travel countdown calendar I’m making for Elise, which I am going to be sharing with +Jennifer Humphries and her readers over at JENerally Informed on June 30th.

At 2.5 years old, Elise is definitely going to have fun during her first “big girl airplane ride” as she is referring to it, but I’m thinking some preparation is in order. Why?

My terror-filled nightmares of travelling alone with my child losing her ever-loving mind in pressurized confinement. No, just kidding. She’s a good kid, but I want to prepare her by giving her some basics that are required of her while she travels. Jeff and I refer to it as “situational awareness,” but back when I was a kid, it was called, “having some common decency for your fellow travelers.”

I am also trying to minimize some fears she will most likely encounter during our trip. She is having issues with loud noises right now and she has entered a phase in which any thing new is a bit scary. I want to ramp up the fun aspects of the loooooooong plane ride(s) we’re going on and help to minimize fears of the unknown.

Before we get started, I want to admit: yes, I know there is chalkboard paint inside my scissors and no, I still haven’t washed it out of there yet. I was trying to get every component of the travel countdown calendar done in the span of one Curious George cartoon, so I was booking it through every step.

The supplies are pretty simple for this project, and can even be used with “left overs from projects past.” I love these kinds of projects! 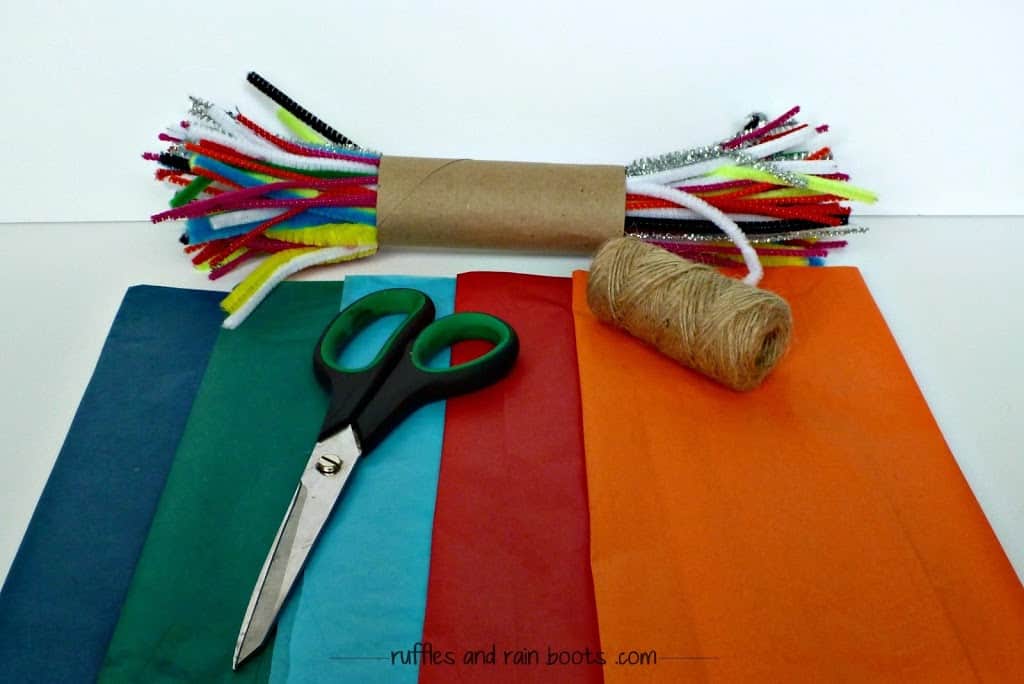 The cuts you make will depend on what size you want to make your fringe tassels. I wanted short, stubby little tassels because this is just an accent for a larger piece. These tassels are nearly 4 inches long when hung. 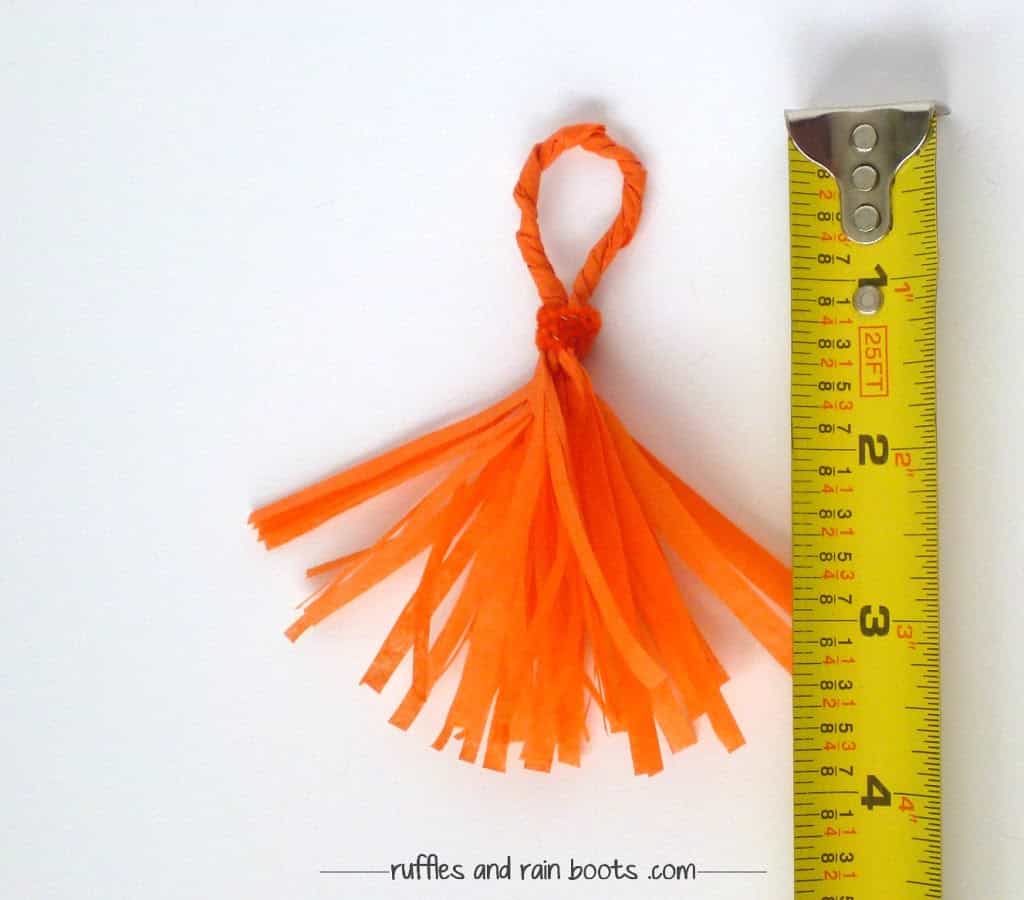 Fold the tissue sheet in half along the horizontal (the longer side) and cut along the fold. Set aside one half to be completed later, if you like.

Fold the half tissue sheet in half again and cut along the fold. Set aside one half to be completed later, if you like.

Fold the quarter tissue sheet in half again and cut along the fold. This is the tissue size I used for these nearly 4 inch tassels.

Note: You can make long, elegant tassels by keeping the height of the tissue sheets as they come. You can even make longer ones by using the horizontal dimension as the length. Just be careful of adding any to the width of the accordion folds you make (next step), as the wider you go, the harder it seems to be able to twist the paper without ripping it. That could be my impatience (and my need for completing this project during a 28 minute cartoon) talking, so try it if you’d like.

I tried a couple of different folds to see if it made any difference, and it did. The tassel on the left was accordion folded (sometimes called a fan fold) and the one on the right was just folded in on itself (flat fold). I tried to capture it in the photo, but I will tell you that the tassel folded with the accordion fold was noticeably fuller.

I even tried to make the flat-folded one appear fuller by cutting the fringe into narrower sections, but it still looked half as full as the one that was accordion folded. 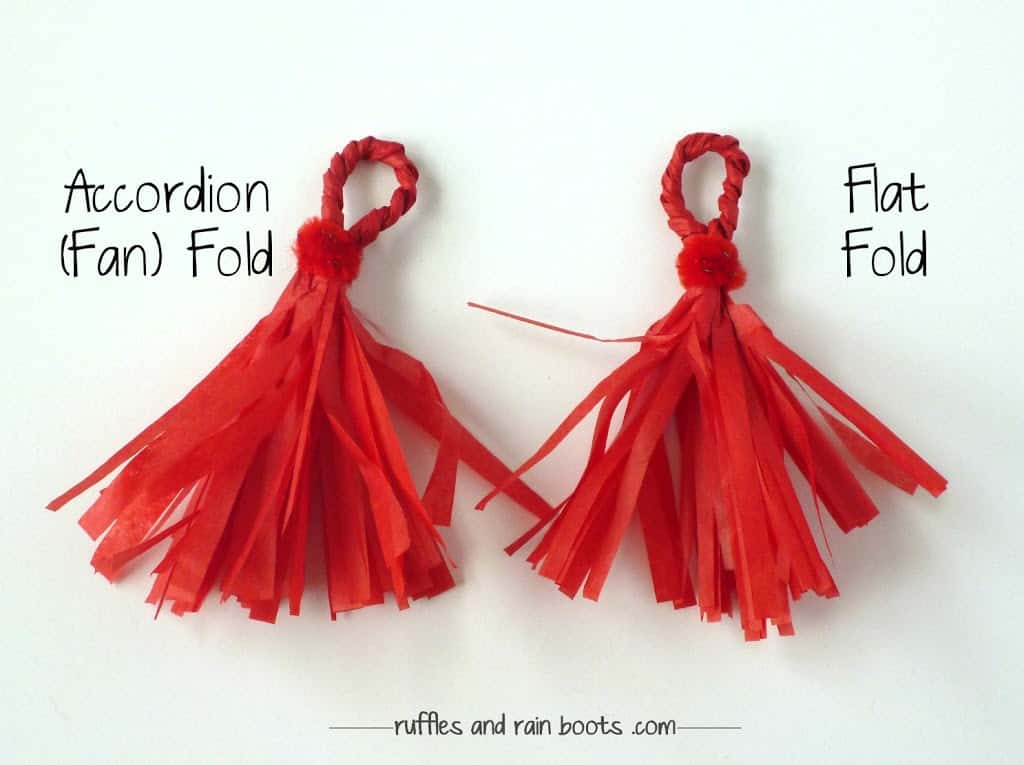 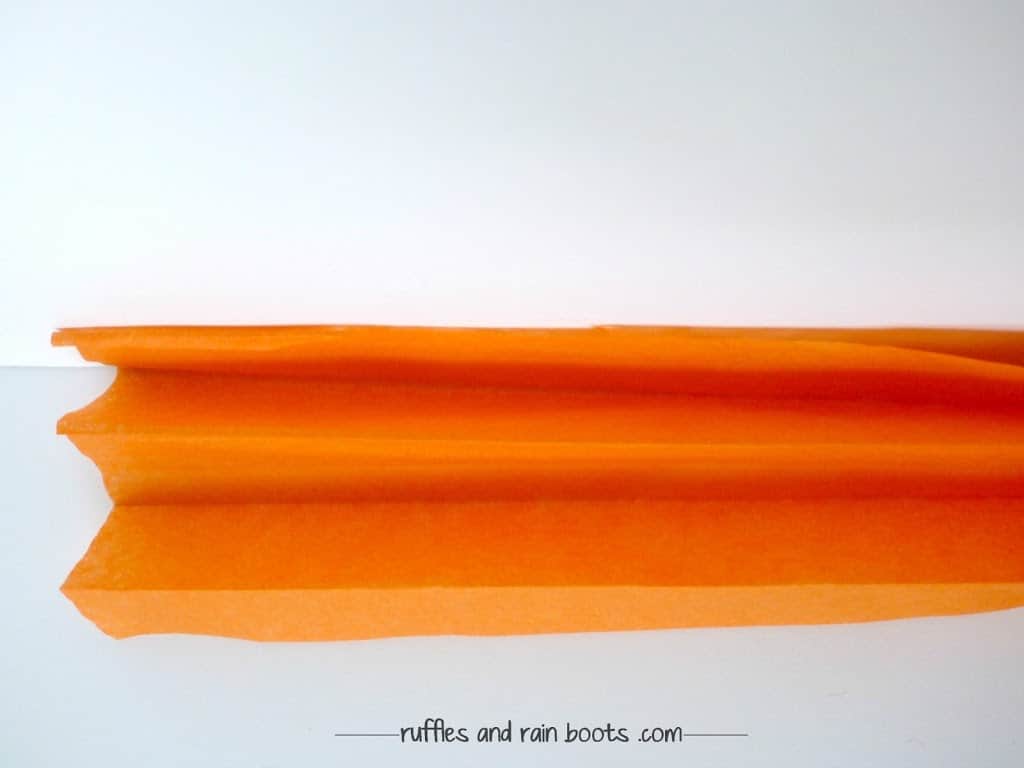 Once you have your section folded, fold the piece in half, aligning the ends as best you can. Snip narrow sections about 2.5 inches from the bottom. Unfold (from the half only) – see pictures below.

This is the only part that can grate on your nerves if you are distracted and are counting down the last moments of your daughter’s cartoon… I’ll be honest and say I did rip one, but I was still able to use it. We’re not using these to safely tie off a climber or anything, so a bit more twisting fixed my mistake enough so I could hang it. 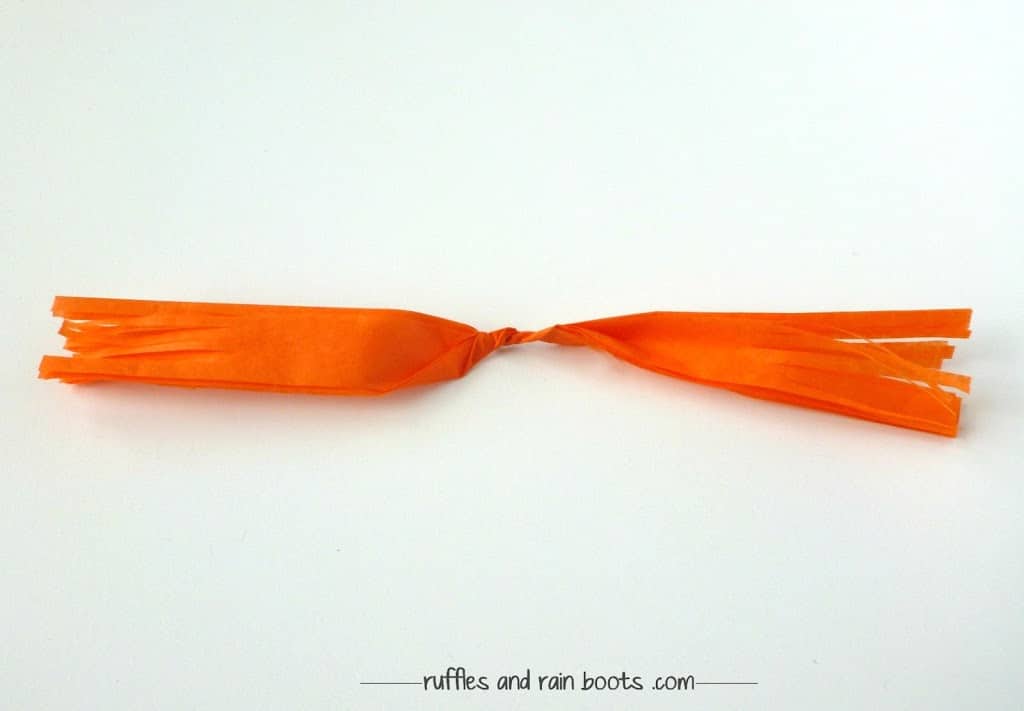 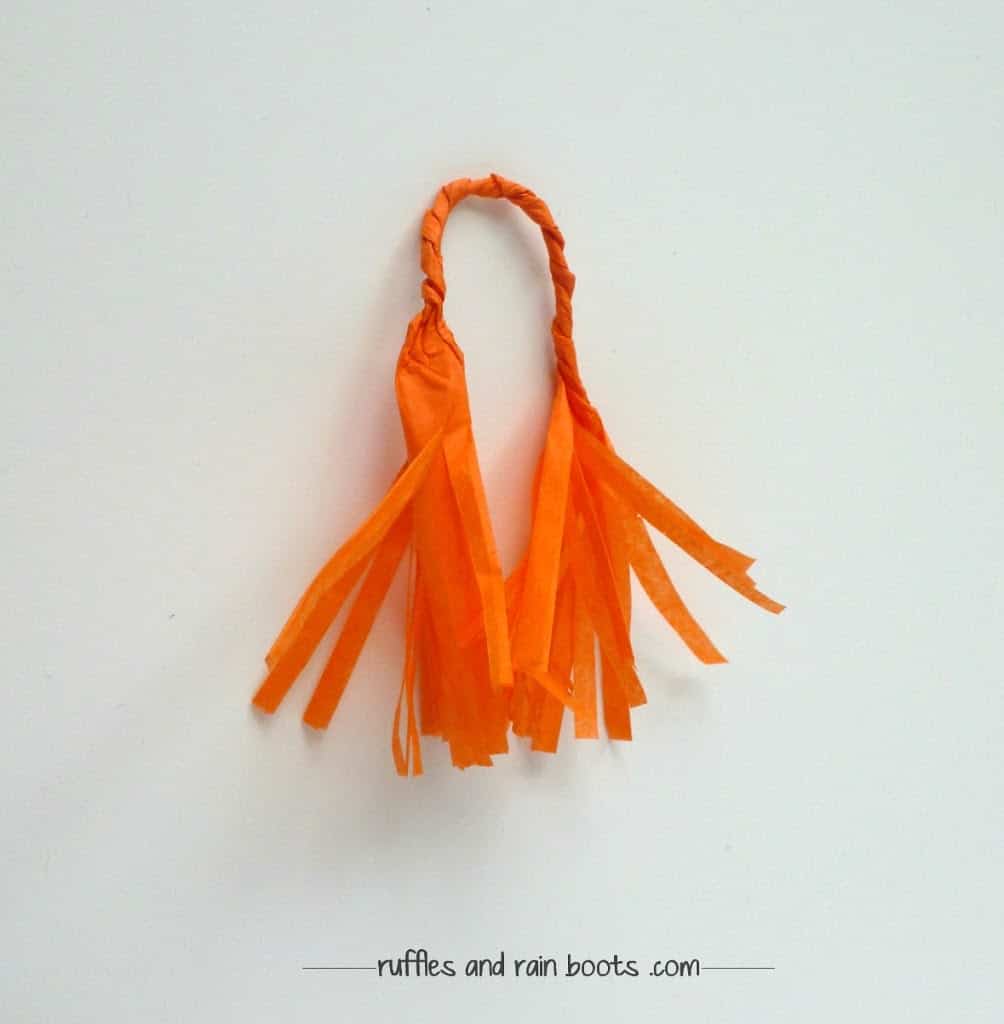 The last step is to secure the loop. You could use glue, hot glue or tape here, but I have 943,569 pipe cleaners in my daughter’s crafting cabinet so I’m actively seeking as many uses as I can for those things. I really don’t want to be cleaning up another bird’s nest made with a million pipe cleaners.

For about 2.75 seconds, I thought about doing a neat mismatch pattern with the pipe cleaners and then realized:

I snipped off about 3 inches of a {nearly} matching colored pipe cleaner to use as my tie. So just take any pipe cleaner and secure that little sucker.
Prep Time 2 minutes
Active Time 10 minutes
Total Time 12 minutes
Difficulty Easy
Estimated Cost $1 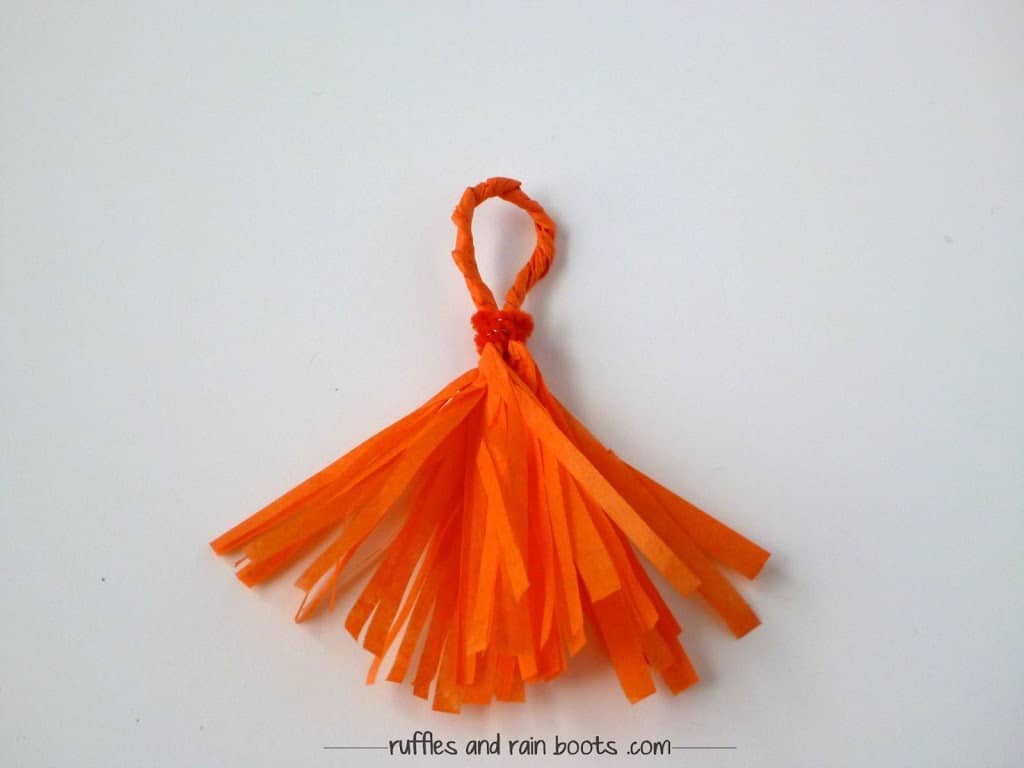 It might have been the lack of caffeine, but there were some that didn’t look even… Don’t judge me, but my smidge of OCD is showing here. In order to help them look their best, I gave some of the tassels a hair cut. Nothing too drastic, but this kind of stuff drives me batty.
P.S. Sorry about the glitter reflecting the light in this one. It seems every surface of our existence has a fine dusting of glitter. I don’t know how that could have possibly happened. 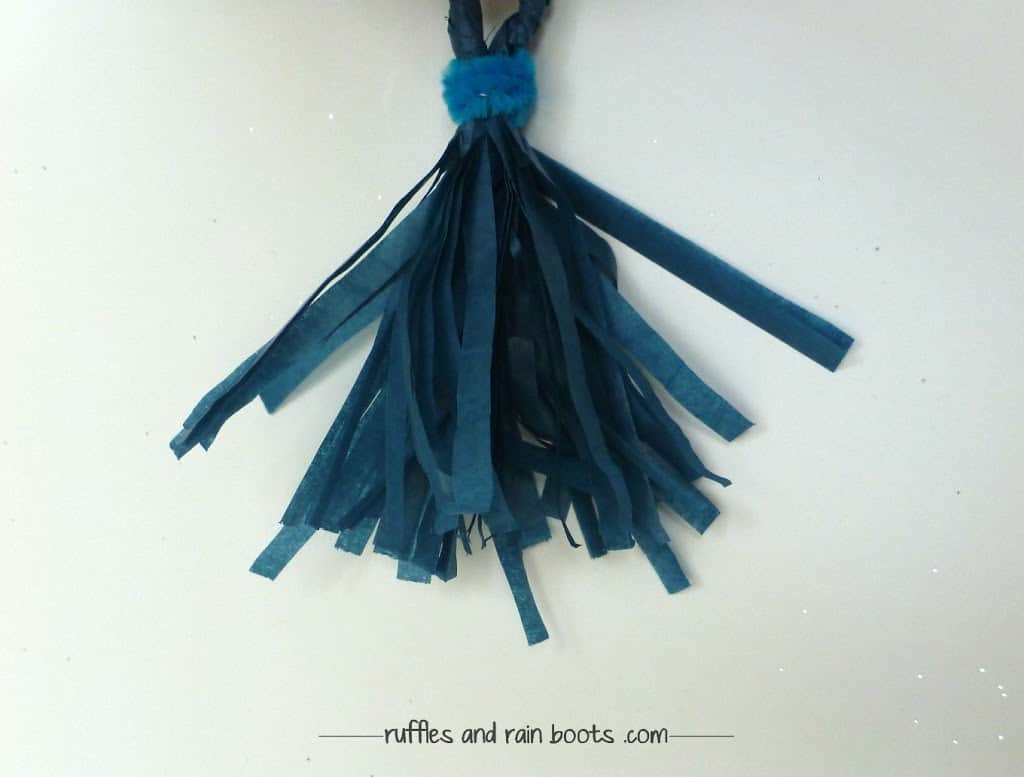 You’ve got a few more to make but then you end up with an adorable DIY tassel fringe garland! As I mentioned, I’m going to use this as an accent to a unique travel countdown calendar I’ll be sharing with Jen and the readers of JENerally Informed on June 30th.
Notice that I was missing some tassels (the light blue color in the first photo is absent). The little one absconded with them before I noticed they were missing from the pile! She helped me restring the garland though (working on her lacing skills) and we were able to snap the shot above. 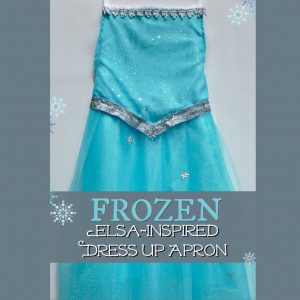 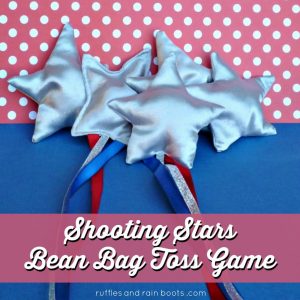