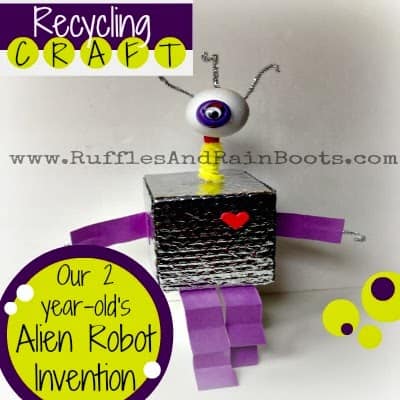 The 2 year old’s contribution: Lola, the alien robot who lives on the table in outer space.

Click on “Read More” to join in the fun that ensued while Elise was designing her new friend.

It was the “antsy hour” in our house: the time before we need to start dinner but after our big ‘post nap’ activity. Um, actually we’re all friends here so I feel as though I’m in the circle of trust.

My name is Sarah and my 2 year old doesn’t nap. Thank you for welcoming me to this meeting. Ha!

Sometimes I really do feel I need to join a support group for parents of toddlers who gave up their naps but who still really need them. Both of us. Both of us still need the 2 year old to be napping. Alas, I have not yet found that group, so I come up with this kind of stuff instead.

For Christmas, my brother (in law), John, got the hubsters the ‘bacon of the month’ club membership from a favorite deli of John’s back in Michigan. Each month, we get a perfectly prepared pork package from Zingerman’s.

Zingerman’s really does a great mail order service and they package it very well. After seeing the shiny, bubble-wrap-esque stuff that keeps the ice pack and bacon chilled, Elise shouted out that she thought it looked just like an “alien robot.”

Come on, people, I just couldn’t pass up the opportunity to capitalize on that, so Elise was allowed to rummage around in multiple craft boxes for her supplies to make an invention. 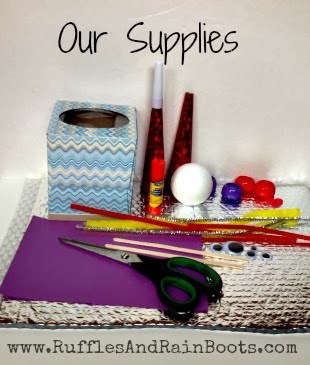 She selected the following for her supplies: the silver bubble wrap, pipe cleaners, purple construction paper, some googly eyes (of course), some broken party horns, some coffee stir sticks, and a few lids to some veggie pouches. I added the empty tissue box and the Styrofoam ball from the recycle bin. I snapped a picture of the supplies because I was curious what she would choose once she saw how her invention was coming along.

We talked about what the word ‘invention’ meant but I don’t think she gave two hoots. She was only thinking of Lola.

I love that name, by the way. Her other idea for a name was Poo-pay. Uh huh. Boy am I glad she went with Lola.

As you can imagine, I had to “help” with a lot of this. Most of it, in fact so there are no ‘Lola in progress’ pictures.

Elise glued the silvery bubble wrap and purple construction paper pieces onto the box, bent the pipe cleaner antennae and put the sticker heart on Lola, but I did everything else.

It was still a great activity because I asked Elise to describe exactly what she wanted Lola to look like. I did have to edit it a bit though, because when asked how many arms Lola should have, she responded, “a-fousant-y arms.” I didn’t have enough scraps of purple construction paper to do “a-fousant-y arms,” even though I’m not sure what “a-fousant-y arms” looks like. I was picturing a lot, so it just didn’t happen.

Elise told me that the arms would be long with one finger so it could “boop” her friends. To work on hand-eye coordination, we often do a single finger “boop” with Elise and I guess it’s just so much fun, she wanted to share it with the rest of the galaxy. 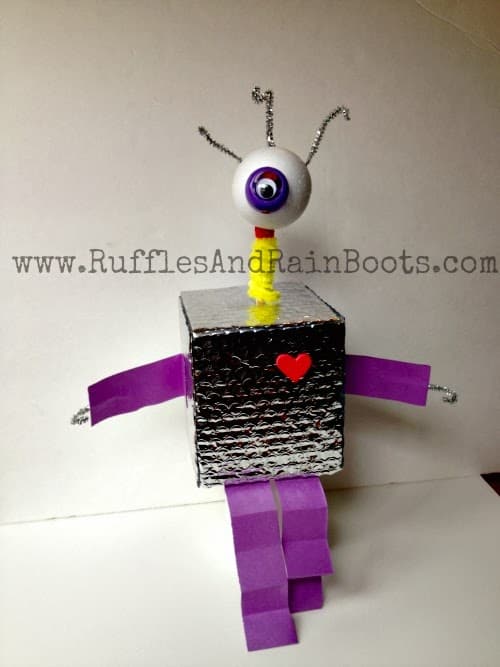 She really, really, really liked Lola’s head after we made it and left it aside to dry, so I knew we had to make that somewhat interactive. We talked about it raising and lowering (but staying inside the box), but we were nearing dinner-prep time and I couldn’t figure out a way to do it with the remaining pipe cleaner. I settled on having it come completely off so Elise can serve just the head at her next tea party.

Actually, I didn’t even get an invite to that one…

Let us know in the comments section if you have any ideas for other recycle bin inventions. We love hearing from you!

Thanks for playing with us today!