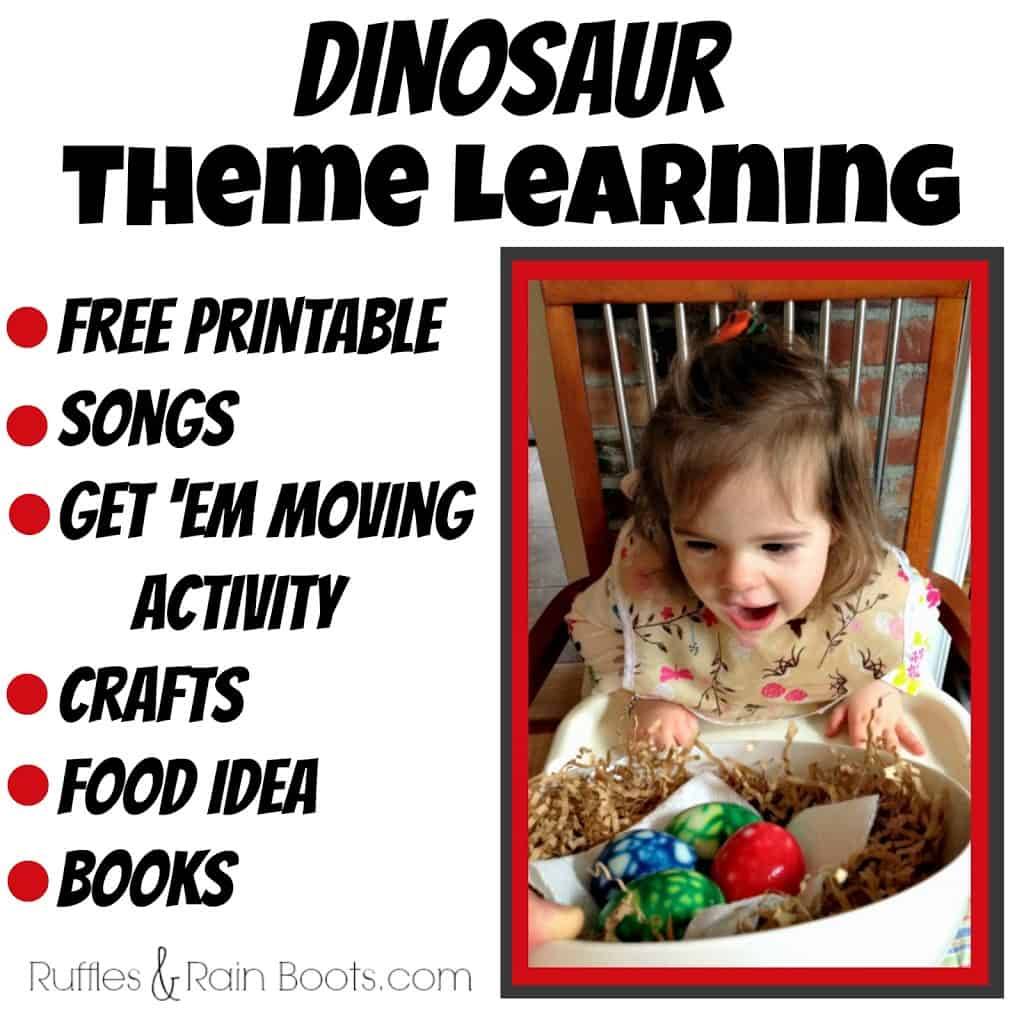 Did I mention the kiddo loves dinosaurs?

I would be remiss if I didn’t I also mention the cool dinosaur eggs we had for lunch recently. Look at Elise’s face when I showed her those!

The eggs, along with the some more dinosaur crafting, books and songs, makes me the latest recipient of a 2 year old’s “Coolest Mom” award! Well… I mean I would be getting the award if she knew she was giving one out. I’m sure I’d at least be in the running.

Click on “Read More” to join our Jurassic jollification! It’s a word, I promise.

I mentioned here that we will begin incorporating some theme learning into our days. Also in that post, I might have mentioned Elise’s obsession new interest in dinosaurs.

At least once every day, we incorporate a fun activity, a dance, a yummy meal or snack, a cool science experiment, or a song that has a dinosaur element to it. It’s kind of more like two or three times a day, but she loves them (and I haven’t run out of ideas yet,) so it’s good.

In this installment of our dinosaur theme learning, you’ll find the following crafts and activities:

Elise (26 months) loves to craft… I might have had something to do with that, but I’m not jumping to any conclusions. 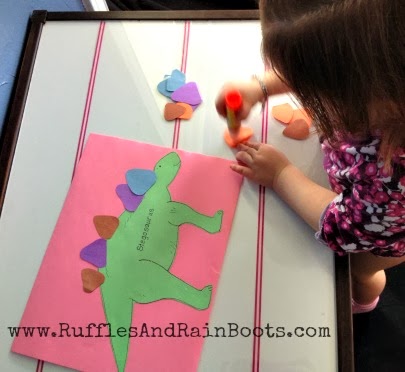 One of the construction paper crafts we did recently was a HUGE self-esteem boost for the nugget, so I thought I’d share it. I’ve made a “printable” for it so you don’t have to come up with one. I’ve drawn this by hand, so you don’t have to worry about copyright issues with random clip art found on the internet. 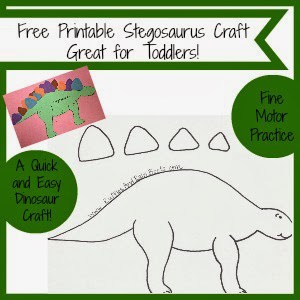 This is my first time using Google Docs for this, so if you encounter any problems, let me know. Just click on the printable picture (in the green frame) and it will open so that you can print without requiring you to sign up for anything! Thanks, Google for making that little change.

Instructions: print and cut out template pieces, trace onto and cut out from construction paper (as many plates as you’d like), and glue it all to another piece of construction paper. I also wrote the name of the dinosaur on there – I’m not sure why I do that, but I’ve done it since she first started crafting and it’s become habit.

It was a great activity for Elise to work on her gluing, but more importantly, it was one that taught her how to deal with mistakes. She put a few plates on sideways but left them there too long to be able to move them. It caused some distress that she worked through with a little help from me reinforcing cause and effect.

I say it was great for her self esteem because I didn’t help at all and look what she did! She put the majority of the plates right where they belong on a stegosaurus. Woo hoo!

We wrapped up our crafting and Elise started dancing to celebrate her stegosaurus. Elise dances a lot – is that all 2 year olds? – so we normally spend a good bit of the morning or afternoon being silly and moving to music. Sometimes we make up songs and sometimes I need a bit of help!

Other than our made up dinosaur song (that can be found here), “The Dinosaur Stomp” is Elise’s favorite to get moving to the Mesozoic music! Sara at Let’s Play shares her years of juvenile music education for parents and teachers to use in their home or classroom.

Basically, the song gets Elise moving like a Tyrannosaurus Rex, a Triceratops and a Stegosaurus. And hey, there’s stomp-stomp-stomping so what’s not to love?!

After all that stomping around, a little dinosaur lover builds up quite the appetite. So what should be on the menu, but YUMMY dinosaur eggs!

As you can imagine, this one went over like wild fire! I have tons of great pictures where she is closing her eyes and saying, “mmm yummy Tyrannosaurus Rex egg!” 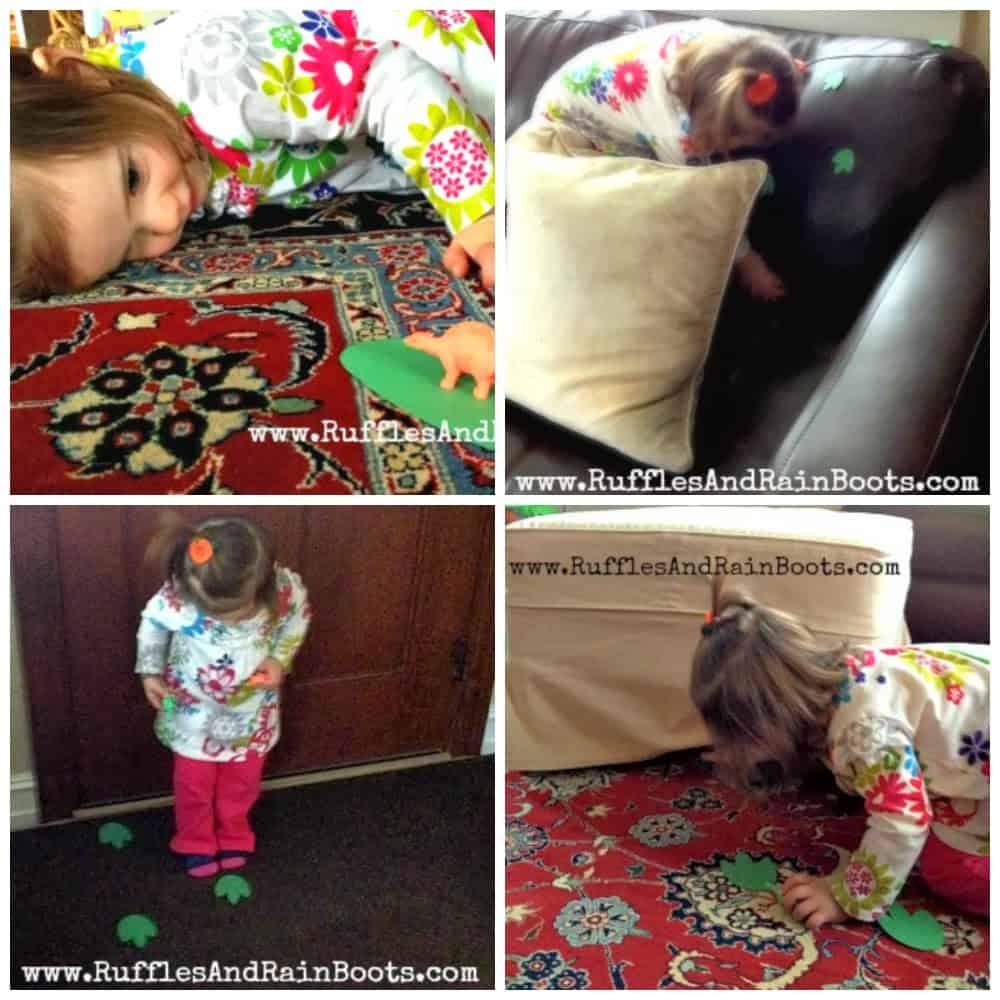 When Elise woke from her nap (yes, she actually took one this month), she was excited to find some dinosaur tracks right outside her bedroom door!

If I’d have known this kid was going to love this as much as she did, I’d have started this little bit-o-fun right from the beginning!

She was VERY interested in the tracks going under, behind, and coming in through the door!

I set up four different sets of tracks because I had four dinosaur erasers (I even put some coming down from the wall) and she followed each one, track by track.

After our dinosaur tracking, we watched an episode of PBS kids’ “Dinosaur Train.” Who couldn’t watch this show with episode titles like, “Remember the Alamosaurus?” For days, this Texas-to-Washington transplant just cracked up with that one! Anyway, I watch them with Elise and we’re both entertained and I swear, I learn something new Every. Single. Time. Um, actually I think I learn many “something new’s” every time. :)

As always, we fuel Elise’s love for reading and this set of books (some ours, some from the library), were right in-line with our fun.

by Mark Sperring – (partner link). She does this. A lot.

The other books are Sandra Boynton’s Oh My Oh My Oh Dinosaurs!

by Kate McMullan. Notice how “well-loved” our Boynton book is there.

In the next installment of our dinosaur theme learning series, I’ll be sharing a great bath time activity, some cardboard cuties, and some links for you to share information with your toddlers about dinosaurs. Oh and of course, some more dinosaur crafts!

If you have any ideas or resource links on how to continue indulging the little one in dino-love, let us know in the comments section. We love hearing from you!