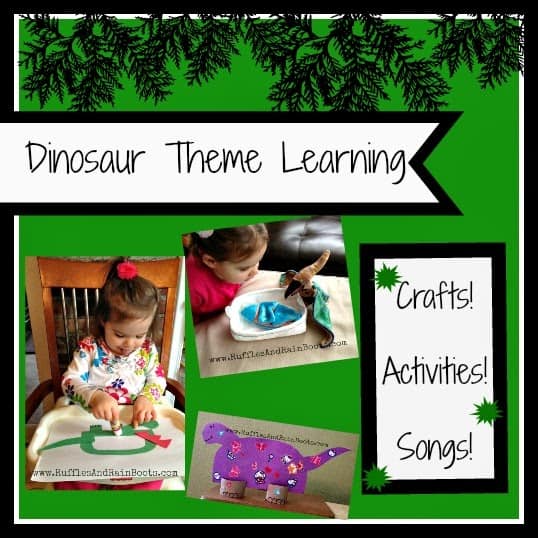 Sometimes when I say, “I love you, Elise,” she just responds with, “ROAR!” and a toothy smile.

Like I said she likes them a lot, so of course I had to set up a dinosaur activity. Or two. Or three. Ok, I might have gotten a bit carried away, so this is the first part in a series. What can I say? Dinosaurs are big-time fun around here!

I read an article about thematic learning, so that led me to read another. And another and another…

In a nutshell, it’s fun for the student (Elise, our 2 year old) and the teacher (yours truly)! The main reason I am incorporating it into our play-based learning fun is that it supports brain and learning psychology research that learning in an integrated process (Source).

With the snap of cold weather (okay, cold for Seattle), I set up a few activities while she was reading books one morning. I had nothing planned, so these are all things that can be whipped up very quickly.

In this installment of our dinosaur theme learning, you will find the following crafts and activities:

First up was a fun alphabet craft. Nothing new here; I didn’t reinvent the wheel. From construction paper, I cut out an uppercase “D” and some dinosaur parts (it was a great way to use construction paper scraps).

I gave Elise all the pieces and she placed them where she thought all the parts should go. It was amazing to watch her work through this.

It was also kind of hard for me, which is weird to admit. I wanted to help her when she asked, but I forced myself to sit back, encourage, and just watch her so she would give herself the time to figure it out on her own.
And then she asked for her glue stick. I can just picture her a few years from now saying, “Mommy, can I have my own glue gun, please?”
Oh, it is coming. This 2 year old nugget loves to craft!
Anyway, immediately after sticking down the last piece of her dinosaur, she threw me for a loop and said, “Now make a pteranodon, please?”
Uuuuh, ok.
Obviously not expecting this, I thought she could work on some sticker art while I quickly cut out some pteranodon pieces… While getting the scissors and some paper, I’m trying think if I have time to Google some free clip art of a pteranodon or not when she says, “I practice scissors like Mommy. Not stickers. Thank you.”

So polite, this little one.

But as you can imagine, the two year old isn’t capable of cutting on her own, even with safety scissors. It’s not something I’m going to let her do without smothering direct supervision, even if she does use her kind words!
She worked on a scrap of paper while I watched and as with anything requiring her full concentration, out popped that tongue! Bam!
It took her several tries, but she eventually cut a piece of the paper! Before that scrap even hit the tray, Elise was asking again for her next project: the pteranodon. I quickly hacked up some construction paper remnants and gave them to her as I finished them.

While she worked on this guy, I asked her to song a song with me. We sung our made-up dinosaur song set to the tune of “5 Little Ducks.”

In case you need to bust it out so that you can cut out pteranodon pieces or appease a toddler in a traffic jam, it goes like this: 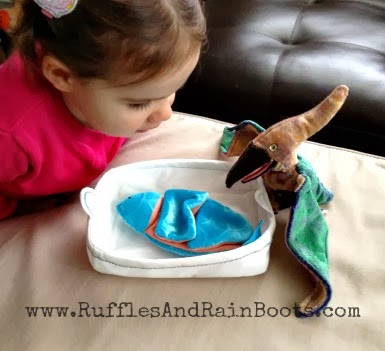 Taking a break for some grocery shopping – one cannot live on crafting, you know – look who we found! A pterodactyl Beanie Baby was adopted on the same day we started our dinosaur focus.

It was kismet, I tell ya.

Here she is feeding him fish because he was hungry and that’s what pterodons ate millions of years ago. Just ask her, she will school you on all kinds of dinos. They really are like sponges – kids, not dinosaurs.

We had a bit more fun with construction paper and glue before moving on to our next dino-tastic activity.

This purple guy got played with a lot! Elise opted for stickering – is that a word? – instead of coloring this cutie.

Sadly, one of his legs went missing after about 2 weeks, so it went in the recycle bin. By the way, if you come over and find it’s leg, please discreetly toss it in the bin – Elise is still wondering where her purple sticky dino could have run off to. Hmmm

A simple toy that has shown serious lasting power was a gift from Elise’s aunt, “Uncle Ralph.” Kris has a special talent for picking out things the little nugget just adores, and these are no exception.

These three absolutely adorable dinosaur finger puppets came in a Papyrus card and are some of the cutest ones I’ve seen. We’ve had no reason to seek out or make some because these have held up very well, but a quick Google search will yield some nifty ideas if you’re looking for some.

We have these out all the time, so we were able to easily jump into some pretend play with Elise stomping around as t-rex and mommy playing the triceratops and the brontosaurus.

I never get to be t-rex…

As with all of our fun, we tie in as many books as we can. You can imagine, with her obsession fascination with dinos, this is not the extent of the dinosaur books we have, just a sampling!

I was very shocked to discover that Elise enjoyed Dinosaur Zoom!

by Penny Dale much more than Brontorina

by James Howe (partner links provided). The latter was very artistic and she had a difficult time figuring everything out, it seemed.

by Charles Reasoner has been a favorite since was very little (about 10 months) and Dinosaur vs. the Potty (Board Book)

by Bob Shea has been climbing the ranks since we got it this past summer.

Throughout all of our dinosaur activities and books, we talked about a few of the more well-known dinosaurs and their characteristics. Elise can now even tell us which dinosaurs are herbivores and carnivores, and what those terms mean. It is amazing what she remembers (and repeats) about dinosaurs, but more on that later.

That’s all for this segment of our dinosaur theme learning. I am so excited to share with you the activity that still has Elise hunting around the house for dinosaur tracks weeks later, but we’ll save that for the next installment.

Let us know in the comments section if you have any fun dinosaur activities. Or, just let us know you stopped by – we love hearing from you!