You can make a quick DIY puppet theater with simple supplies which will be LOVED and used by all the little ones. Ours has lasted nearly 5 years, so it’s a pretty awesome DIY toy for kids. 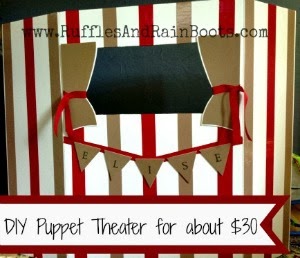 “All the World is a stage… and all the men and women merely players…” Click “Read More” for a quick tutorial.

Shakespeare’s “As You Like It” might not be quoted for our little one in this house yet, but I’m sure we will put the play on the required reading list at some point in her life. I really do enjoy Bill’s stuff.

The inspiration for this next project was to allow for an outlet to help a growing human get a handle on all these new emotions rolling around in her mind and heart. Quite a long bit back, I read that puppets are a great way to get the little-uns to talk about their feelings and I’ve been looking for a puppet theater that fits my needs:

Supplies for a DIY Puppet Theater 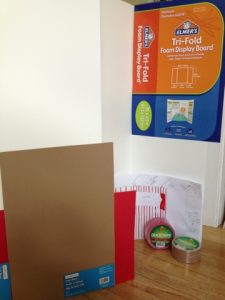 I followed the steps in this Kin Community’s video on You Tube. I made a few changes, however, so read below.

1. Cut a square for the stage – I found that 22 inches from the bottom and 3 inches in from each fold were perfect for Danger’s height.
2. Measure the center and start adding strips of Duct Tape. Here’s where my “to-scale, influenced by the German, kind of previously thought of as useless,” drawing came in very handy!
I am a bit of a perfectionist with straight lines… I found that 3 inches from the edges of the centered piece of tape would get me the best symmetry. Feel free to go all willy-nilly here if you want, though. 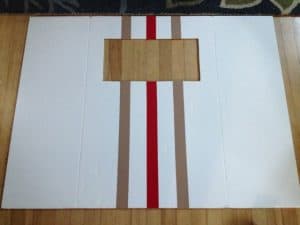 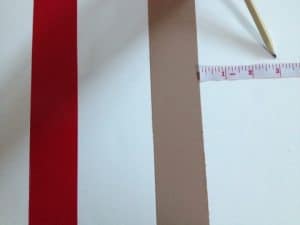 I continued the same 3″ on the sides, starting with the first piece of tape right next to the fold side, making sure that it didn’t interfere with the fold. That would kind of defeat the purpose of using a tri-FOLD board.
Using the advice from the geniuses at Kin Community, I drew a curtain and then used it as a template for the other.
Here’s where I varied it a bit from the Kin video. I couldn’t find the exact shade of red or taupe to match my Duct Tape – yes, it had to match if it was going to be that close to the tape! I chose to make a layered look curtain by using the white foam board cut for the stage and then using a bit of the taupe foam sheet. I hot glued the mess out of that thing, burning the ends of my fingers quite nicely, as one always does when using a “low-temperature” glue gun.
I then tied a red grosgrain ribbon – um, yes it matches the red Duct Tape – and hot glued the mess out of that, too. These curtains are affixed forever, there’s that much glue! 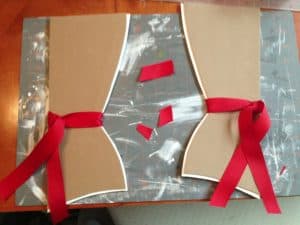 I had some foam board left over from another project, so I cut out some triangles and added the taupe foam sheets stenciled with Elise’s name. I affixed two pieces of the red ribbon to the board, meeting in the middle, and then layered the triangles on top. 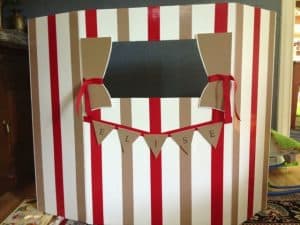 I have grand plans for the back of the theater because if something isn’t multi-use around here, it doesn’t belong! But that will be a project for another day – or more realistically DAYS.
She sure is enjoying it as-is though! 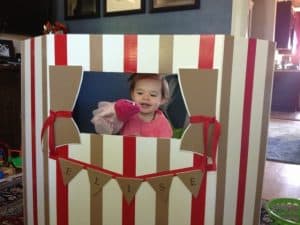 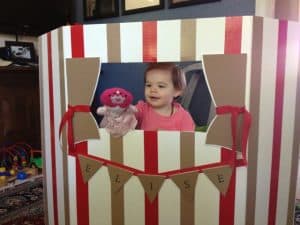 I erupted into a fit of laughter when she turned around the puppet and sweetly said, “there ya go, Mommy.”
There ya go, baby.